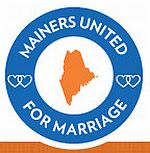 In sports terms, same-sex marriage was the Washington Generals of the political world, with our side going 0-32 when the issue was placed before voters over the years. No more. Pro-gay marriage forces won in Maine, Maryland and Minnesota and looked poise to make it a clean sweep with a win in Washington state.

Voters in Maine, Maryland and Washington were deciding on ballot initiatives that would allow gay marriage. In Minnesota, the fight was to defeat Amendment 1, which would have changed the state's constitution to ban same-sex marriage. The biggest public voice against Amendment 1 was the amazing Chris Kluwe, Minnesota Vikings punter, whose last tweet early this morning was succinct:

"There is no doubt that Kluwe made a difference," Brad Michael of Minnesotans for Equality, wrote me. It was Michael who asked Kluwe to get involved in the campaign and it was a master stroke. Kluwe's "lustful cockmonster" letter made a huge public splash and drew tons of media attention to the race. Interestingly, Michael said that an open letter from University of Minnesota basketball player Trevor Mbakwe was the most popular post on Minnesotans for Equality's website.

In Maryland, Baltimore Ravens linebacker Brendon Ayanbadejo was very vocal in support of the gay marriage measure and he retweeted comments from one woman who said he changed her mind. "I am so happy tonight I could cry. My kids will grow up in the age of equality for all," he tweeted after the Maryland measure passed.

The Maine vote came three years after voters there rejected same-sex marriage, a startling turnaround. Cyd has strong ties to the state with his parents now living there, and I know they are savoring the win. In Washington state, the gay marriage initiative was leading and looked good for passage, though there are still a lot of mail-in ballots to be counted.