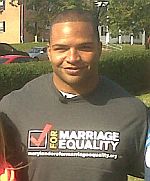 Baltimore Ravens linebacker Brendon Ayanbadejo has been publicly passionate for years about same-sex marriage, and said that Maryland passing a gay marriage law on Tuesday was "like Christmas." He also doesn't care whether his views are popular in the locker room or not, telling David Ginsburg of the Associated Press:

‘‘It’s a done deal and we did the right thing. It took too long. It shouldn’t have been up to other people to decide other people’s fate as far as who they can marry. But we’re progressing, so I'm happy about that.’’

Ginsburg made it clear that not Ayanbadejo's view was not universally popular:

As Ayanbadejo spoke in front of his cubicle, several players made noise behind him to show their displeasure.

Unfortunately, he doesn't name these players, though he pointedly said one was not safety Bernard Pollard, an opponent of gay marriage:

‘‘When it’s all said and done, there are a lot of guys on this team that stand firmly behind what the Bible says — that a man marries a woman and a woman marries a man,’’ Pollard said.

Yawn, the typical bigotry hiding behind the Bible. Pollard did say "whatever lifestyle you want to live, you’re entitled to that," so that's very big of him. Just as long as that lifestyle does not include the same rights as everyone else. I would not expect a locker room to be a place of great tolerance, and think it's wonderful that Ayanbadejo is not backing down an iota for standing up for equality.