Share All sharing options for: ESPN's 'Outside the Lines' talks about Jamie Kuntz's removal from his football team 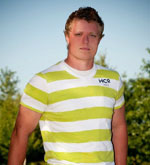 ESPN's 'Outside the Lines' spent half the show on Sunday talking about former North Dakota State College of Science football player Jamie Kuntz, who was kicked off his team in September for kissing his boyfriend (video below). I won't rehash the whole story here, but essentially he was kicked off his team because his boyfriend visited him in the press box (he was injured before the game) while Kuntz was taping the game.

The new news in the piece is that the video tape has audio of Kuntz saying sexually explicit things to his boyfriend. Bob Ley, the host of the segment, said the conversation implicates Kuntz on the issue of sexual conduct during the game:

There was explicit sexual conversation. I listened to a lot of that DVD that the school did provide 'Outside the Lines.' There is specific sexual conversation . . . You could play that for a jury of people just asked for their opinion. You can even infer that there was sexual activity going on from some of the audio there.

Kuntz has said from the outset that there was no sexual activity in the press box. While teammates have claimed they saw Kuntz performing sexual acts (they later changed that to saying they saw him get on his knees), the wall of the press box prohibited them from seeing what they say they saw.

Kevin Blackistone, Chris Kluwe and our very own Jim Buzinski all said there is some kind of anti-gay bias going on here, and that if Kuntz was in the press box with a girlfriend he would still be on the team.

LZ Granderson took a different angle, questioning the legality of the boyfriend's actions because he said it's hard to believe the two did not have sex while Kuntz was 17 (they claim they met after he turned 18).

"I think there's also a question of whether or not this was criminal when it started," Granderson said.

It's a shocking statement, but one without evidence and one I haven't heard from anyone else (even if there are various people obsessed with the age of Kuntz's boyfriend).

The big question now is, will Kuntz play college football again? It's doubtful. There are plenty of coaches who would not mind a gay player on their team. However, because Kuntz fought back against his old coach and the school, the good-ol'-boys network of coaches will circle the wagons and make it very hard for the kid to get a roster spot elsewhere.

Jamie Kuntz Kicked Off Football Team For Kissing His Boyfriend