Chris Kluwe: "We should all be standing up for each other’s rights"

Share All sharing options for: Chris Kluwe: "We should all be standing up for each other’s rights" 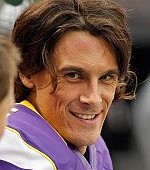 Being regarded as an "activist" in 2012 was a new experience for me. I’ve never really considered myself an "activist" -- basically I treat people the way I would like to be treated and expect them to do the same. I think if we all approached life that way the world would be a much nicer place.

Working to help raise awareness of the discrimination the LBGT community faces made me realize that our society is failing on a fundamental level. We still have hate, discrimination, racism, intolerance, fear-mongering -- in short, we, as a society, possess a stunning lack of empathy.

There’s no trick, no secret, no grand idealism -- simply treat other people with empathy and call out those who don’t. Call them out on their selfishness, their small mindedness, their petty hate; make them realize that an exclusive society eventually splinters and falls under the weight of its divisions; make them realize that we’re all in this together as members of the same species.

This shouldn’t be considered "activism."

This should be considered "being human."

Chris Kluwe, punter for the Minnesota Vikings, campaigned against an anti-gay marriage ballot initiative in Minnesota that was defeate. He wrote this column for Outsports. He can be followed on Twitter.