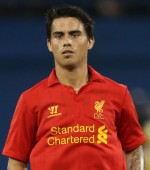 Suso sparked protests last month when he posted a photo on the micro-blogging website of Reds defender Enrique having his teeth whitened and added a tweet which read: "What f**k is he doing? This guy is gay...he does everything except play football."

He later deleted the tweet and uploaded the photo with a different comment, saying: "I dunno what to say..."

The Football Association warned the 19-year-old about his future conduct and was clear about why it issued the fine in a statement:

"The charge, which the player admitted and requested a paper hearing, was that he acted in a way which was improper and/or brought the game into disrepute in that the comment was posted on his Twitter account and included a reference to a person/s sexual orientation and/or disability."

Enrique decried the F.A.'s action, saying on Twitter: "Is amazing how FA can fine my friend Suso Fernandez for a banter thing. Was just a joke!!!" Sorry, but Suso should have told the "joke" in private, not tweet it out to his 144,000 followers.

Contrast this with the NFL and Cleveland Browns doing absolutely nothing when Browns player Tank Carder called a Twitter follower a "faggot." It is great that one football organization takes these things seriously, while another just ignores them and hopes they go away.