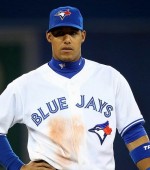 Yunel Escobar is most known for writing a gay slur in Spanish in eye black and then being suspended for three games by the Toronto Blue Jays. Escobar was traded to the Miami Marlins on Nov. 19 and traded again Tuesday to the Tampa Rays. The Rays say that Escobar is a changed person.

''I think he definitely learned a lesson from the eye-black incident,'' Rays executive vice president for baseball operations Andrew Friedman said. ''I think it had a real impact on him and that he feels remorse about it. And the digging that we did - we believe that it was an isolated incident and that nothing of that nature will be a concern going forward, or we wouldn't have acquired him.''

After his suspension ended, Escobar met with two openly gay athletes and Patrick Burke of the You Can Play Project. At the time, one of the athletes who met with Escobar said, “I think we really reached him today. I think he’s had a change of heart and I believe that he’s learned from this.”

Escobar, an infielder, is 30 and still has some good baseball left in him. He was punished for what he did, seems to have learned his lesson, so being in Tampa will be a chance for a fresh start.