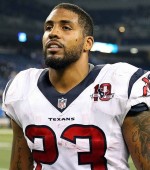 Houston Texans running back Arian Foster says it won't be long before there is an openly gay NFL player and he would be fine with it. Foster, one of the key reasons the Texans have a legitimate Super Bowl chance this season, was a guest on this week's edition of "Jim Rome on Showtime." In his "10 questions" segment, Rome asked Foster:

"How long before an active NFL player comes out?

Foster: "I'm not sure man, but in today's world it's getting [less] taboo. It used to be very taboo for homosexuality, but I think now-days it's getting to be more and more open. People are more accepting of it and I tend to agree. I think to each his own.

I found Foster to be engaging and articulate in the segment, mentioning philosophy, science, peace and happiness, weighty subjects not normally bandied about by many athletes and his answer on the gay question was spot on. The Texans now have three players who are openly gay supportive, including linebacker Connor Barwin, who talked to Outsports last summer about his gay brother, and defensive lineman Shaun Cody who looks forward to going to a gay wedding since the decor will be fabulous.

A comment on our list of 28 gay-supportive NFL players (Foster makes it 29) asked "why are the gays and lesbians so concerned with what others think?" It's simple -- numbers. There are many more straight players in any locker room and any openly gay player would need allies like Foster to create a supportive environment.