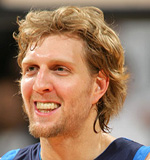 I am a fan of Deadspin, read it daily and often find stories for this site on stuff they've run. But they are really reaching with an item today with the headline: "Did Dirk Nowitzki Shout A Homophobic Slur After Hitting The Shot That Locked Up Tonight’s Mavericks Win?"

Here is the item in its entirety by Timothy Burke (go to the post to see the video they are referring to):

We're not entirely sure what it is Dirk Nowitzki shouts after hitting the dagger to ensure tonight's 97-94 double-OT win over Portland, but it sure looks like the same thing that earned Kobe Bryant an unprecedented $100,000 fine last season.

For all we know, it could be something foreign, like "varken vagant," which looks very similar when spoken and means "ridiculous pig" in Low German, not that we even know if Dirk speaks that dialect. We hope he does, because if he said what it looks like in English, that's very uncool.

I watched the video a dozen times (the part where Dirk says something is best seen around the 50-second mark) and I have no idea exactly what was said. It seems that he says "fuck" or "fucking" or "fuck-yeah," but beyond that it's pure conjecture. As one Deadspin commenter noted, Nowitzki is wearing a mouthpiece, which makes reading lips even more difficult. And he's German, for whom English is a second language, further complicating matters.

There is no audio of what he said, nor do we have any courtside witnesses popping up to confirm what he said. I question the need for the item (that has 26,000 views as of this writing) in the absence of any concrete evidence that Notwitzki used a homophobic slur. The use of such slurs is not acceptable anymore and leads to fines, so accusing -- or even suggesting -- someone of uttering one needs a higher standard of proof than trying to read lips and guessing. Just ask Jim Harbaugh.