Share All sharing options for: Ravel Morrison charged with rules violation by the Football Association after 'faggot' tweet 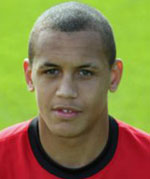 The Football Association has charged Ravel Morrison with a violation of FA Rule E3 "for use of abusive and/or insulting words including a reference to a person’s sexual orientation." Morrison recently Tweeted the word "faggot" at a fan. Rule E3 of the FA states:

A Participant shall at all times act in the best interests of the game and shall not act in any manner which is improper or brings the game into disrepute or use any one, or a combination of, violent conduct, serious foul play, threatening, abusive, indecent or insulting words or behaviour.

If found guilty by the FA, Morrison faces a monetary sanction or suspension, according to the rules.

Morrison has until Friday to respond to the charge.