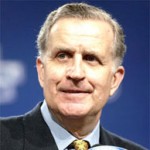 We first wrote about Paul Tagliabue, then the NFL commissioner, and his support for gay rights in 2005. Then he was honored by PFLAG with a leadership award (Tagliabue has a gay son, Drew). This pat week, Tagliabue was at Bowdoin College in Maine to participate in the third annual "Anything But Straight in Athletics" dinner, which combats homophobia in sports.

In his talk, Tagliabue referred to the dinner several times. “The beautiful thing I heard tonight is that [students] are anxious about being leaders and want to be leaders and want to find out how to lead on these issues [of strengthening tolerance in sports],” he said. The sophomore athletes who attended the pre-talk dinner were all selected by their coaches based on their future leadership potential. At the dinner, they discussed ways to make their team cultures more welcoming to LGBTQ players.

Tagliabue, who was commissioner of the NFL from 1989 to 2006, has made gay rights a priority. He and his wife last October endowed the LGBTQ Resource Center at Tagliabue’s alma mater, Georgetown University, with a $1 million gift. Tagliabue described this act as “a way of making a statement, to say this center is a priority and it’s permanent.”

He said that pro sports have come a long way in addressing gay slurs uttered by players, saying “there’s been a substantial shift in major sports’ conduct and language.” During his tenure as NFL commissioner, then Lions president Matt Millen called a player a "faggot" with no repercussions. It's hard to believe the same thing would happen now.

The Bowdoin dinner sounded fascinating and the student paper has some terrific excerpts from athletes and coaches from the event (last year, we wrote an article on an openly gay Bowdoin tennis coach and a lacrosse player). I especially liked this anecdote told by the women's tennis coach:

“Hobie” Holbach told a story about getting lost on a 10,000-foot mountain with Colin Joyner ’03 and Bowdoin’s former men’s tennis coach. After scrabbling down a steep slope, they got trapped at the bottom of a ravine at 1 a.m., freezing cold and soaking wet. To stay awake and warm, they paced back and forth and told stories. At one point Joyner, who had known Holbach for years, confessed he was gay. “What do you think of that?” Joyner asked. Holbach responded, “Does it help us get us off this frickin’ mountain?” While they were happily rescued by helicopter the next day, Holbach said he was saddened that it took a life-threatening situation to convince Joyner to confide in him. “As a coach, I would be very sad if my players felt like they couldn’t open up to me or the other team members,” Holbach said.

Hat tip to Ken for the item.