Photographer West Phillips met David Testo soon after the pro soccer player came out publicly last autumn. Test was in Miami for a warm respite from the media circus that had erupted after his big announcement. The two hit it off and Testo agreed to jump in front of Phillips' camera. I caught up with Phillips, who shared a couple of the beautiful images he captured.

Outsports: How did you meet David Testo?
Phillips: I met David out socially one night in Miami Beach. He and his friends started a conversation with us and we just seemed to hit it off right away. I actually didn't know about his soccer career or the fact that he had just come out publicly until the next day when he and I were hanging out.

What was your inspiration for the photo shoot?
Since we were in beautiful and warm Miami Beach, what better way to capture that than to be on the beach itself? 2eros is a great Australian swimwear and underwear brand that I've worked with and I decided to shoot David wearing swimwear from them. David's athleticism was enough inspiration for the shoot.

How did his place as one of the very rare out pro athletes play into your interest in him as a model? And how did it play into how you shot him?
David arrived in Miami right after he came out back in Montreal. Miami was meant to be his break from the media attention that would likely ensue. I feel honored and lucky to have been able to capture him at this pivotal time in his career, as well as in the gay-athletes movement. I think the simple and classic image of David standing proudly on the beach holding a soccer ball sums up his character - strong, confident and proud.

How was he to work with as a model?
The shoot was so laid back and fun, full of great energy! It definitely helped that we had met just a few days prior and had developed a level of comfort and great rapport. This wasn't the standard 'model' shoot, so I wanted him to really just let go and be himself, which he did.

What stood out to you about Testo during the shoot?
I was impressed with how comfortable and easy he kept the tone during the shoot. I've worked with all sorts of personalities when shooting, and this one will remain one of my all-time favorites. No egos or attitudes to deal with, just the two of us on the beach having a good time. This is the kind of shoot that reminds me why I love my job!

You can find more of Phillips' work at his Web site. 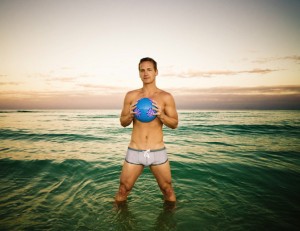 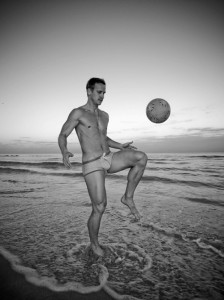