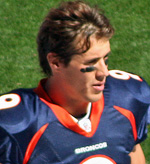 Denver Broncos backup quarterback Brady Quinn is backtracking from comments made to GQ about his teammate Tim Tebow. Quinn was among a bunch of NFL players and observers quoted by Michael Silver about the meteoric rise of Tebow this season. Here is the Quinn quote that has gotten a lot of attention:

“If you look at it as a whole, there’s a lot of things that just don’t seem very humble to me. When I get that opportunity, I’ll continue to lead not necessarily by trying to get in front of the camera and praying but by praying with my teammates, you know?”

Quinn also suggested that Tebow leapfrogged him on the depth chart and started for Kyle Orton because that's what the fans wanted. After his quotes were made public, Quinn took to Twitter today to backtrack:

“The comments attributed to me in a recent magazine article are in NO WAY reflective of my opinion of Tim and the Broncos,” Quinn wrote. “Tim deserves a lot of credit for our success and I’m happy for him and what he accomplished. Most importantly, he is a great teammate.

“That interview was conducted three months ago, and the resulting story was a completely inaccurate portrayal of my comments. I have addressed my disappointment with the writer and have reached out to Tim to clear this up. I apologize to anyone who feels I was trying to take anything away from our team’s or Tim’s success this season.”

Silver, for his part, wonders what the fuss is about, tweeting:

“The people ripping [Quinn] 4 his comments in GQ have it wrong. He was honest and not bitter at all. We talked for 50 minutes and he was respectful. . . . He was put in a uniquely weird position that would have rattled most quarterbacks. I thought he handled it well. He’s a standup guy,” Silver wrote.

We all know how ultra-religious Tebow is, and Quinn is not shy about his beliefs, often tweeting the name of a Biblical passage. He is not claiming he was misquoted, so I am not sure why Quinn felt a need to backtrack. He was right -- there is nothing "humble" about someone who has made "Tebowing" part of the language.