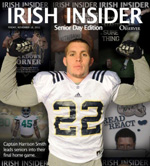 The NFL Combine starts Thursday in Indianapolis, a fleshfest of hopeful future pros lifting weights, running routes and doing drills all while wearing tight Underarmour-type outfits. It's no wonder Mike Florio of Pro Football Talk dubbed them the "Underwear Olympics."

Not too long ago, the league even showed the weigh-ins, where the player would strip to their briefs, but stopped the practice because too many players found the process uncomfortable. Nonetheless, you will hear scouts, analysts and writers gushing about the bodies on these guys like they were flipping through Manhunt profiles. Take the pre-combine talk about studly Notre Dame safety Harrison Smith:

You can follow the combine on the NFL Network, which will have hours of coverage starting this weekend. And NFL.com has an extensive section, including a photo gallery from last year's combine.