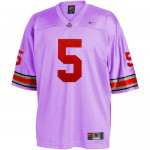 Ohio State football players who loaf through winter conditioning drills will be forced to wear lavender shirts "in the weight room, at the training table or in the classroom" as a badge of shame. It's part of a motivation strategy by Buckeye football’s new director of performance, Mickey Marotti, hired by new coach Urban Meyer. Yep, "lavender" shirts, a color most associated with gays and lesbians. (Update 1: Ohio State changes shirt color, says it had nothing to do with sexual orientation. Update 2: Urban Meyer apologizes.).

“You don’t want to wear those,” senior linebacker Etienne Sabino said yesterday. So far, he hasn’t. Not many players have been identified as lollygaggers.

First, and the focus of my concern, while being masked as a tool to build a competitive team environment, forcing a player to wear a lavender jersey as punishment is patently homophobic, sexist, misogynistic, etc. It takes a color that is feminine—and regularly associated with either women or the gay community—and assigns it to weakness, lack of commitment, or failure to work hard. It is then used to demean and humiliate, you know, because the color is capable of emasculating even the manliest of men.

Whaley send this letter to the editor of the Columbus Dispatch:

So Ohio State football's new director of performance makes players who are loafers on the field, in the weight room, etc., wear a lavender shirt to embarrass them. Does he also use anti-gay slurs when referring to these slackers or is the shirt's color enough to send the same homophobic message?

Read Olsen's whole post since he goes into detail on whether forcing a player to wear a "shirt of shame" violates the school's anti-hazing policy.

Regardless, it's clear why lavender was chosen, since it's a color that connotes weakness (i.e., it's a "gay" color). My guess is that pink was not chosen because of its association with breast cancer, with even non-loafing NFL players wearing pink in parts of their uniforms each year.

The lead to the Dispatch story says, "in a scarlet and gray world, a lavender shirt sticks out." Except it really doesn't -- polka dots or shirts with a loaf of bread printed on them would stand out a lot more. Or how about forcing players to wear a maize and blue shirt, the colors of hated Michigan? That would be the worst badge of dishonor for a Buckeye.

The last Ohio State coach, Jim Tressel, gave an interview to a Columbus gay magazine where he talked about the importance of including everyone, including gays. The new coach has begun his tenure with an assistant making players deemed loafers to wear a "sissy" shirt.

Update: After this item was written, Olsen received this from a friend who wrote various Ohio State officials to complain about the lavender shirts. This is from the athletic department:

"Please also know that there are no lavender vests or pullovers being worn by Buckeyes during their workouts. The pullovers that our coach mistakenly referred to as “lavender” are actually purple. Very purple. Our coach sincerely but mistakenly thought the color was lavender when he mentioned the pullovers during an interview. Our players wear standard gray shirts with scarlet workout shorts during conditioning drills. Some performers also wear a colored mesh pullover for various achievements. Some fast guys get red pullovers. Others get a green pullover, etc., etc. Our coach made no attempt to associate the color purple with anything other than our players who don’t go 100 percent at all times (…and thus the term “loaf”). Purple, quite simply, was the only color left from a handful of different colored pullovers that are typically worn in-season by members of our “scout” team as practice jerseys of our upcoming opponent."