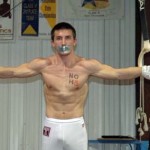 Junior Temple University gymnast Dash Sears is the reigning Mr. Gay Philadelphia, winning the title last spring. He is one of two openly gay gymnasts on the team, along with Evan Burke, who is out this season with a broken foot (last year's team had a third gay gymnast, John Gaffney).

Thanks to our friend Dan Anders, below is a gallery of Sears, 21, competing at a meet this month. On his profile page at Mr. Gay, Sears -- who stands 5-2, describes himself as "not short ... but fun-sized," adding:

I'm both a political theorist AND activist with stints supporting Occupy Philadelphia and talking to LGBT youth about coming out and growing up gay moving from a small town in PA to a big city. If you're not an actor you'll never be a factor. It's time we show that the LGBT community is made up of people that deserve rights and freedoms [not corporations). Have a very gay day! :)

Instinct Magazine last year had a terrific profile of Sears, Burke and Gaffney and the bond they formed. There is a funny anecdote of how Sears came out to his parents, surrounded by his entire team: