Share All sharing options for: Men in tights -- the NFL combine ends 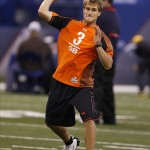 The NFL Combine, aka the Underwear Olympics, have concluded after four days of hopeful pros being tested, weighed, poked and prodded by a bunch of mostly middle-age men. Where else can you hear NFL Network analyst Mike Mayock call someone a "good-looking kid," or have players' bodies talked about in such great detail (we have a combine gallery below).

For all the attention lavished on the combine by the NFL and the sports media, it really doesn't matter a whole lot in terms of where a player is taken in the draft. Most of these guys will get further evaluated in visits to their schools by interested teams. And regardless of how Stanford QB Andrew Luck performed, there was little doubt he would be the overall No. 1 pick by the Colts.

But hey -- it is fun to watch these guys run, jump and lift weights in tight spandex. Once they become pros, we only see them in action in pads and helmets.