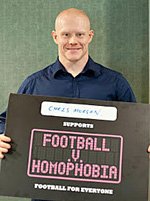 Competing at a body weight of 180 pounds, Morgan successfully lifted 478 and 539 pounds before narrowly missing out at 600 pounds. "I’m very pleased to have defended my British title and to have qualified for the World and European Championships happening later this year," Morgan said.

We have featured Morgan's story before and he has been a vocal advocate for ending homophobia in sports. It's cool that he is able to make his mark in competition as well as outside of it.

In honor of the Football vs. Homophobia campaign in Britain, Morgan wrote a remembrance of gay English soccer player Justin Fashanu on the website of the Justin Campaign. Fashanu was hounded for being gay and committed suicide in 1998.

At the time all this happened I was just coming to terms with my own sexuality and was taking my first steps towards a career in sport. I realized that I was faced with a choice of whether or not to be open about my sexuality in the brutal and testosterone-driven sport of powerlifting. ...

For the next four years Justin’s story stayed with me as I strived to win my first title in powerlifting, as it filled me with indescribable anger and rage. At the Gay Games in Sydney 2002, I won that first Gold Medal and immediately dedicated it to Justin’s memory.