The hottest players in the Super Bowl

Share All sharing options for: The hottest players in the Super Bowl 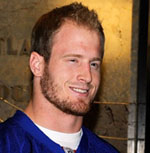 In my Super Bowl for the Clueless, I listed a few of the players to watch for in the Giants-Patriots game from a hotness factor. Neither team really grabs me all that much and Cyd was miffed that I said the Giants were better looking. Now comes along Whitney Jefferson on Buzzfeed with a thorough look at her choices for the hottest players come Sunday.

Jefferson said she knows nothing about football, but her comments by each of her choices are witty. Such as: Kicker Stephen Gostkowski: "Most Likely To Be Cute, But Ultimately Boring In Bed." Or: Eli Manning: "Most Difficult To Find Hot Photos Of On The Internet"

Now that the game is almost near, I would love to know:

Gay.net also has their list of some of the hottest stars in the NFL, past and present.