Brian Burke: There is a lot of support for gay players in the NHL

Share All sharing options for: Brian Burke: There is a lot of support for gay players in the NHL 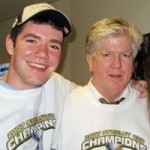 There was an awesome interview yesterday with Brian Burke, general manager of the Toronto Maple Leafs, about whether the NHL is ready for an openly gay player. Burke's son, Brendan, was gay and died two years ago in a car accident. Brian Burke has become a strong public advocate for gays in sports. Here is what he told George Stromboulopoulos of the CBC:

Right now, a player who's contemplating that is thinking the whole world's going to be arrayed against him and be this mountain he's gotta climb. And I think he's gonna find -- I really believe this, watching the acceptance that my son got when he came out, in the hockey community at Miami University -- this athlete that has the courage to come out, is going to find that hill's a lot less steep than he thinks it is. That there's a lot of support. I know the players on our team have all spoken to me about it, and said, absolutely, a gay player is welcome here.

"A lot less courage." Thank you, Brian Burke! I get sick of hearing how "impossible" it is for a gay player to come out and the hand-wringing that goes on and keeps these guys in the closet. Here is an NHL G.M., a guy with the power to hire and fire, saying a gay player would be welcome on his team.

The whole interview is great, including where Burke talks about how he never allowed discriminatory comments of any kind in his household: