Super Bowl XVI: It's a repeat as Giants knock off the Patriots at the end

Share All sharing options for: Super Bowl XVI: It's a repeat as Giants knock off the Patriots at the end 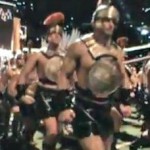 How I saw Super Bowl XLVI, including my hot players of the game:

They did it again. The Giants are the Patriots' Kryptonite, their daddy, their master, their tops, choose your word. For the second time in five seasons, the Giants have beaten the Patriots in the Super Bowl. Sunday it was 21-17 on a last-minute touchdown drive. In the 2007 season it was 17-14 on a last-minute touchdown drive. Once again, it was a game either team could have won and the Giants made a couple of more plays that made the difference.

This was not a great Super Bowl, though the last-play Hail Mary by New England was dramatic. I watched at a party of about 75 (an awesome affair hosted by Cyd and his partner Dan) and there were very few moments where people got loud and really no play that had people leaping from their seats. It had an exciting fourth quarter and ending, but it was not overall very memorable. It kind of summed up the 2011 season, which was kind of flat despite some thrilling moments.

--The highlight of the game, obviously, was Mario Manningham's 38-yard catch along the sideline on a pass from Eli Manning on the game-winning drive. It was a terrific catch but Manning's throw was even better, placing it right between the cornerback and safety. It was the game's longest play and caused Pats coach Bill Belichick to burn a timeout on an unsuccessful challenge. He had to challenge since the play was so close, but losing a timeout really hurt at the end.

--Patriots quarterback Tom Brady was good, but not great and he was anything but clutch down the stretch. He completed a Super Bowl record 16 straight passes and gave the Pats a 17-9 lead with 11 minutes to go in the third quarter. Then he seemed to lose it, going 7 for 18 the rest of the way, with an interception and getting no points. The Giants' rush seemed to pressure him and he just looked off.

--Brady is now 2-4 in his last six playoff games. It's a weird stat since he's a better QB now than he was back in 2001-2004 when he won three Super Bowls. Just goes to show that football is a team game, despite what many in the media think.

--No, Eli is not better than Peyton or Brady. He's just not. He is clearly an elite QB and the best fourth-quarter player in his position right now, but before this season he had gone three seasons with zero playoff wins, missing the postseason the previous two seasons. He needs to be consistent every year. And this season, his team went 9-7 (the worst record ever for a Super Bowl winner) and simply got hot when it counted. One more Cowboys first down in Week 14 and the Giants don't even make the playoffs. He deserves all the credit for winning two Super Bowls, but stop the nonsense about him being better than his brother or Brady, two guys who have done it at a higher level longer.

--Wes Welker is being fitted with goat horns after his drop at the Giants' 20 with four minutes left on a drive where the Patriots wound up punting. It was the key play in the game from a Pats standpoint, since they almost certainly win if he hangs on. He beat himself up after the game pretty bad, with tears in his eyes, saying he should have caught the ball. Probably so, but it also was a tough catch since Brady did not make a good throw even though Welker was wide open. How ironic that Mr. Dependable Welker (122 regular season catches) dropped the one he had to have the most.

--So much for anyone hoping Rob Gronkowski would be a factor with a high ankle sprain. In the past three seasons, we have had four key players (three in Super Bowls) with that injury and none were effective.

--So much for all the theorizing that the game was set up perfectly for the Patriots since the Giants shot their mouths off all week and most people were picking them. Sometimes, talk is backed up and the consensus is correct. I forecast a close Giants win based on them matching up better. I went 9-2 picking the playoffs this season, not a bad ever. 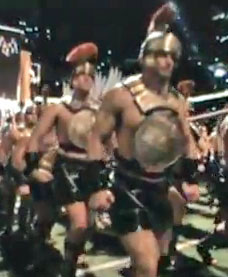 --Madonna's halftime show certainly was a spectacle, though I did somehow miss M.I.A. popping the finger and apparently say "f***. At my party, the game had 60% of the attendees watching. The halftime show had a 100% viewing rate. That's when you know you're at a gay Super Bowl party.

--Hot players of the game: Madonna's dancers, especially the guys who escorted her in (right). She did (somewhat) bring the gay to the Super Bowl. Our friend Sam, a gay high school swimmer, posted this on Facebook: "Why was there a football game during a Madonna concert?"

--For all of you that read my recaps each week, thanks so much and see you next season. For a Colts fan, I'll forget 2011 pretty quickly.