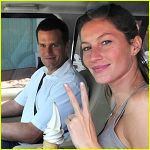 Gisele Bundchen, the supermodel and wife of New England Patriots quarterback Tom Brady ripped his receivers for dropping passes after the Pats lost the Super Bowl to the New York Giants, 21-17. She was heard saying this by Insider.com:

I can understand Mrs. Brady being pissed and there were some big drops, but this has not gone over well. It's not like her husband was blameless. He gave the Giants two points when he panicked and threw the ball away in the end zone, giving the Giants a safety. He also threw an ill-advised long pass that was intercepted in the fourth quarter and finished the game 7 for 18. Brady failed to lead his team to any points in the game's final 25 minutes.

The most critical drop was that of Wes Welker, a play that turned the game. But even then, Brady's pass was somewhat off, turning an easy catch into one more difficult (though one Welker should have made). I know Brady will not be criticizing his teammates since he knows they have bailed him out many times in the past and this stuff evens out; plus, he's a great teammate. His wife should have just kept her thoughts to herself.

This is how this is being seen in Boston, as evidenced by this comment: