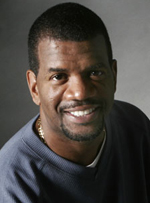 Updated at 2:43pmPT with comments from Charissa Thompson.

Today's episode of ESPN's First Take tackled the issue of the New England Patriots' post-game party. While Skip Bayless didn't find much fault with the players dancing (possibly intoxicated) at a previously planed event, Rob Parker was most concerned about the fact that there didn't seem to be many women at the event. Clearly uncomfortable with so many men, some of them shirtless, dancing together, he begged, "where are the females?" Good heavens, we must have females!!

Host Charissa Thompson soon chimed in that at least one woman was spotted near the dance floor, adding, "so that's good news."

Thompson said in an email to me that she didn't mean anything by it:

I was merely making a casual/innocent reference in the context of a response to something Rob said about the lack of women in the party video. When the video then showed a woman, I was simply responding to him. I didn’t mean anything by the comment. I hope this makes sense to you.

It does make sense. I imagine with all the foolish banter between Parker and Bayless, there's lots of time to be filled and it's not easy.

Still, this incident is an example of the underlying root of homophobia in many people. It looks weird to some people to see so many men having fun and dancing together without a woman present. These are bigger-than-life men, heroes of today, and they must have women present, damn it! Otherwise it's just...well...plain wrong. Weird. Queer, if you will.

Why is Parker so afraid of a room of men dancing together? Why does there have to be a woman to de-homofy the environment? Why can't a bunch of guys who just went through a grueling 19-game season simply dance around together and have fun with friends? It's sad to see this paid ESPN employee so desperate to declare the scene "no-homo," and I must say I was disappointed to hear Thompson chime in upon seeing a women with, "that's good news." Though her thoughtful response goes a long way!

For his part, Parker is little more than a Bayless-type attention-seeking clown. He's gotten into trouble in the past for saying Kevin Love would suck in the NBA because he's white (Parker is black). He had to leave The Detroit News in shame for his pitiful columns.

This is no slam against ESPN. We have praised ESPN repeatedly for the company's inclusive policies and actions. It's just sad to see the locker room uber-macho posturing that's allowed to get on the air. Unfortunately they haven't posted the clip online so we can't share it.