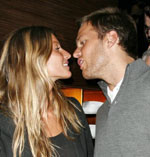 New York Giants running back Brandon Jacobs is the early leader in the race for Male Sexist Pig of the Year award after saying this about supermodel Gisele Bundchen, the wife of New England Patriots quarterback Tom Brady:

"She just needs to continue to stay cute and shut up."

After the Patriots lost to the Giants in the Super Bowl, in part because of dropped passes by their receivers, Bundchen was caught on tape saying:

I was critical of her comments simply because that kind of public discord is not helpful to any team and was something her husband would never say about a teammate. But Jacobs' "stay cute" comment is the definition of sexist and uncalled for. I am surprised he didn't tell her to get back in the kitchen. Giants defensive lineman Osi Umenyiora took a different tack:

"I mean, that is her husband. She is supposed to stay out of things like that, but at the end of the day that is their relationship and she has the right to say whatever she wants to."

Bundchen is apparently Public Enemy No. 1 in Boston, with people calling her "Yoko" and noting that the Pats have not won a Super Bowl since she hooked up with Brady. I get that players' spouses will be lightning rods (see the wives of Kurt Warner and Albert Pujols), but Jacobs' "stay cute" comment likely won Bundchen some female fans who have put up with that kind of crap their whole lives.