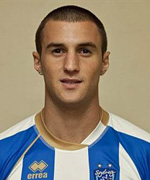 Emmanuel Giannaros rode on the float

Four soccer players from the Sydney Olympic pro team in Australia rode on a float in this weekend's gay Mardi Gras parade in Sydney to help promote solidarity and fight homophobia in sports.

Brett Studman, Emmanuel Giannaros, Phillip Makrys and Will Angel rode on the float as guests of the Sydney Rangers, a gay soccer club. Studman told the Sydney Morning Herald about getting negative reactions from fellow players for participating:

"I've been called a lot of things in my time, and it means nothing. To me, it's more important to get up there and show my support for something I believe in than worry about whether I'll cop it later on. Hopefully that won't be the case.

"Derogatory words get tossed around in the heat of the moment all the time, but from what I've seen, homophobia is not a prevalent factor in our game. I've got a number of mates from the gay community, and I believe in equality for everyone. It's going to be an experience, that's for sure."

Sydney Olympic officials were totally behind the four participating in the parade, which was held despite heavy rains.