A year after coming out as gay, Warriors president Rick Welts at peace

Share All sharing options for: A year after coming out as gay, Warriors president Rick Welts at peace 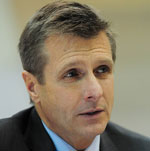 A year ago, Rick Welts was known only in the NBA world as an executive with the Phoenix Suns. Then came a front-page story in the New York Times in May, where he came out as a gay man and his world changed. He suddenly was seen as a positive force for change in a sports world still rife with homophobia.

Now the president of the Golden State Warriors, Welts reflected on the past year in an interview with Mark Emmons of the San Jose Mercury News, and the news has been nothing but good.

"It probably wasn't as hard as you might think because I had this amazing group of friends and family who embraced my entire life," Welts said. "It was just this one part of my life that I kept quiet because I did fear what the consequences would be if I shared that. Maybe it was somewhat of a burden, but it's not like I had this tortured life."

Welts left the Suns and moved to the Bay Area to be with his partner, flight attendant Todd Gage. He had no intention to going back to the NBA, but was offered the job by an ownership fully aware it was hiring a gay man. Joe Lacob, one of the owners of the Warriors, remembered their interview when he brought up Welts' New York Times story:

"I felt like not mentioning it would almost be as bad as making too big a deal out of it," Lacob said. "I wanted to acknowledge it, talk about the reaction and then move on. I respect him for what he did, but it's just not a relevant issue with doing the job. And you cannot find a negative reference on Rick Welts."

Welts says he is often asked about when a pro athlete will come out and his reply that it's eventually going to happen.

"It's going to be much more heroic than what I did," he said. "It's just a different set of circumstances that an athlete would be facing. But I think we're on a course where that's just going to be inevitable."

It's been great to see Welts embrace being a role model, which was going to happen once he came out. It's also great to see an ownership that will judge Welts about his performance in his job, not his sexual orientation.