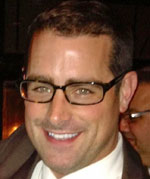 With 87% of the vote counted, Sims had 51.6% (3,661 votes) to 48.4% (3,428 votes) for Josephs, a margin of 233 votes. The Associated Press declared Sims the winner and Sims claimed victory, though Josephs had not yet conceded by midnight; the final votes will be counted Wednesday. The district is very Democratic, so if Sims' lead holds, he will be heavily favored to win election this fall and take his seat early next year.

"We were the second largest state to never elect an openly gay legislator," Sims, a lawyer active in gay-rights issues, said at the party celebrating his apparent victory at Woody's bar in Center City. "I'm excited to get to work."

Sims first achieved national prominence in gay circles in 2009 when he told his story to Outsports about being an openly gay captain of his college football team. He was credited with putting together an amazing organization and working hard to unseat Josephs. Dave Davies of the Newswork blog wrote:

Josephs, who was elected when Ronald Reagan was president, was simply overhelmed by Sims' direct mail and field effort. A veteran committeeman from the 8th ward told me he'd never seen anything like it: 10 direct mail pieces and two election day door-hangers, with plenty of sneakers on the street.

If you look at Sims' campaign finance report, you'll see this is no mystery - scores of contributions, many from out-of-state, reflecting the push to make him the Commonwealth's first openly-gay legislator.

Assuming his lead holds, this is a fantastic achievement for Sims, 33. You can check into his Facebook page to read or post congratulations.