Share All sharing options for: Former college volleyball coach says fear kept him from coming out as gay

I’ll get right to the point. My name is Derick White and I am a former collegiate head coach. I am also gay. I remained in the closet for my entire coaching career because of one simple factor – fear. I will explain this in more detail in a bit, but that fear kept me from having the kind of career I would have liked to have experienced.

My upbringing was typical for a young kid in the Midwest. Unconditional love from my military father and stay-at-home mother, outstanding support from my grandparents and great-grandparents, and a close bond with my brother and sisters. I was lucky to have such great relationships. But I knew that there was something different about me that I didn’t understand. It took me until I was 29 to finally admit what that was -- I was gay. But in that time, I learned a lot about myself and just how strong I could be.

Life in high school was perfect on the outside. My list of accomplishments and honors read like the type of resume any university would be crazy to turn down. My life was great at first glance. I was a friendly, outgoing, thoughtful and caring person. I was that person who always aimed to please. I knew I had a good life – who wouldn’t want to be the Homecoming King? But under the surface, things were crashing down all around me. Divorce, death and health issues in my family. I didn’t know how to deal with these struggles and heartaches, so I ignored them. And it worked … temporarily.

Once college began, I immersed myself in so many activities and clubs that I didn’t have time to think about the hurt I had been experiencing. I was so unhappy with myself and continued to hide it. I played baseball at Missouri Southern State University and my teammates became my second family. We spent so much time together at practice, games, weights, class, meals, bars and parties that they probably knew me more than anyone else. But they still only knew a sliver of who I was. My life was in a downward spiral, but this time I was doing it to myself. I was the one that was supposed to be controlling my life but instead I had given up on myself a long time before.

Once I graduated with my degree in 2006, I took a position with my alma mater in the housing department. Over the next year, I really worked on myself and finally was pleased with how things were going. I started to make some changes and was feeling much better about myself and my future. I knew I wanted to get back into athletics, I just wasn’t sure what route to take. 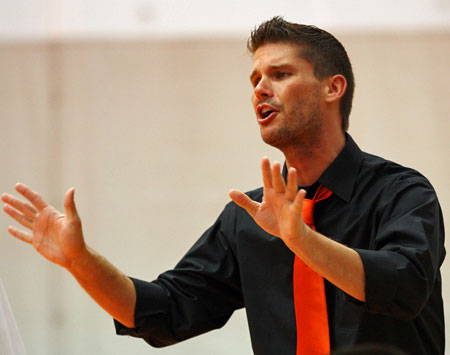 I accepted my first collegiate coaching position in 2007 at NCAA Division I University of Missouri-Kansas City as an assistant volleyball coach. I had played volleyball growing up and had been coaching at a high school close to my hometown. I was very lucky to have been given the opportunity to coach at such a high level for my first college job. I made the move and began working immediately. I loved coaching, the school, the athletes, the staff and the city. It was a perfect match for me.

With the move, it allowed me to explore things about myself that I had always repressed. I was so far inside the closet, I wasn’t sure how to meet people. That was when I discovered several Internet sites (such as Craigslist) that made meeting other guys who were gay, bi or curious much easier. I made a lot of mistakes and used some poor judgment on occasion. I was naïve and a bit too trusting at times, but I learned from those experiences. Luckily for me, I got out of those situations with no consequences for my actions.

In 2009, I accepted a head coaching position at Missouri Valley College, a smaller, private college in the middle of the state. I continued using the Internet to meet people, but was much more careful in how I went about it. I met someone within the first month of my new position and we started a relationship that would last for 15 months. Neither of us were out, so it remained a secret for the duration of that time. He lived about 2 1/2 hours away, so we got together whenever we could. Things didn’t work out in the end and we both went our separate ways. I had two other relationships during my time coaching at the college, but was never out to my athletes or department. Not until now, that is.

I told my immediate family that I was gay in July 2011. I wanted to tell them all at the same time so I sent them an email. I know it was very impersonal, but I wanted to be able to tell them everything that was in my heart and not leave anything out. I was nervous to give them the news, especially my father, who had retired from the military and was very conservative. I worked on the email for two days and finally with some strength I hit the “send” button. Within minutes, my brother called me and told me how proud of me he was. I was immediately in tears. Before I awoke the next morning, I had heard from my sister and both of my parents. All were very supportive and reassured me that they loved me no matter what. A tremendous amount of weight had been lifted off my shoulders. Since then, every person I have confided in has been great about it. I am so lucky to have such amazing people in my life.

I resigned from my position at the college in late January. I was offered a position with a pharmaceutical/healthcare IT corporation in Kansas City that I could not turn down. I miss coaching tremendously (it was a very hard decision to make), but it was a decision that needed to be made for my future. My partner Brad and I are looking to start a family and this new position will make that easier both financially and personally. The new position is where he lives, so we will be able to be together full time and look toward a future family together. It will also allow me more opportunities to continue my existing modeling and acting career, which is something I love doing.

Many factors contributed to my decision to keep quiet about my sexual orientation until now. For many years I was ashamed of being gay. That shame then turned to fear. And I allowed that fear to run my life until I took action. It allowed me to finally felt joy and acceptance, not only from my family and close friends, but also from myself. The biggest obstacle that I encountered in this journey was me … it just took me a while to discover this.

I wish I could have had the courage to speak out while I was still coaching at the college level. Comments made by some administrators and parents made me believe that it would be in the best interest of the programs for me to remain silent. I now realize that was ridiculous. I was contributing to the whole situation I should have been fighting. Yes, I was a gay collegiate head coach. Did that have anything to do with my skills or abilities as a coach? Not at all.

My only regret is that I would have chosen to live an open life during my coaching career. It would have been a challenge within the athletic department, but it would not have hindered me from doing my job and winning games.

I'm sure there would have been some backlash from some of my athletes and their parents, but as a coach, I am used to others not liking or agreeing with some decisions. The only difference here is that this was not a "decision" that I made for myself. I am proud of who I am and who I have become as a person, leader and coach. I hope that my former athletes and mentors would agree.

Since leaving Missouri Valley, I have not heard much from anyone at the school. A couple of my players will text or contact me on Facebook me, but nothing from the administration, other coaches or faculty.

I have formed solid bonds with Nick Clark and Kirk Walker (two coaches that I reached out to after reading their stories on Outsports) and have the utmost respect and admiration for them as both coaches and people. They have both been very instrumental to my progress in coaching and also in my personal life. Kirk has been a great sounding board for me and is always willing to listen when I need an ear. He also has no problem beating me soundly in a friendly game of Words With Friends (he is cut-throat!). Nick and I have developed a great relationship that all started with our love of volleyball. We actually coached against each other a few years ago in the same conference and I am so proud to see what his career has blossomed to. Both are great individuals who are wonderful advocates for all in athletics.

I am eager to find different ways to get out there and do my part to combat homosexual prejudices in athletics as well as in our communities. I am always refreshed when I read about others doing their part and I am ready to take more on my shoulders as well. Nick and I were texting a couple days ago about how I wanted to find some stuff that we could do together or separately. Blogs, videos, appearances, whatever I could do to help others out there (no matter what age or career) that are in the same boat as I was. If you have any ideas or connections, I am up for suggestions.

The reason I am coming forth now isn’t for any recognition or praise. I am doing this so that other athletes or coaches can know that they are not alone.

I know of other closeted coaches out there and for so long I was playing the same part. But I know now how much I let fear overshadow the truth. My advice is simple: If you expect your athletes to give you everything they have, you must do the same in return. If you are dealing with issues in your own personal life, your coaching will suffer. Be fair to yourself and your athletes by giving them everything.

I hope that others can learn from my story and gain support in knowing that they have someone out there that has their back. I know how much that helped me. If there is anything I can do to help spread the word and provide support, please do not hesitate to contact me. No matter what anyone tells you, it does and it will get better.

Derick White can be reached via email at derickwhite@hotmail.com or on Facebook.