Share All sharing options for: Athletes and coaches from NYU combine to create terrific It Gets Better video 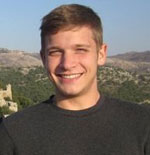 Jay Hayes, captain of the men's volleyball team at New York University, is openly gay and he wanted to share his story. He thought about doing a personal video for the It Gets Better Project. He then had a better idea -- involve all of NYU athletics to make a video, showing support from athletes, coaches and administrators (see their work below). Hayes, who introduces the video, tells Outsports how it all came together:

The NYU Athletics It Gets Better video was the product of a lot of hard work from a dedicated group of people. I originated the idea of a department wide video, after wanting to make a personal It Gets Better video myself. I thought the message could be so much stronger with the whole NYU Athletics community support. After first approaching the Director of Athletics, Chris Bledsoe, and receiving his full support, I knew this project had the chance to be a huge success.

The production team then assembled. It was comprised of myself, Assistant Athletic Director Peter Krasny, and NYU Tisch film students Mary Ellen Pesanello, Lucas Woods, Bryan Fox and Jon Annunziata. The score you hear during the video was produced by the very talented Andy Stein, also a senior captain of the NYU men's basketball team. ...

This video is intended to encourage young LGBT athletes to know it is possible to not only come out in their respective athletic communities, but thrive in them while being out. Being an athlete should never hinder someone from being themselves, and we here at NYU have tried to show that.

In addition to Hayes stating that he is gay, we also hear from Jolie Ward, women's volleyball coach, who says, "I'm gay and I'm proud of who I am." There is also an interesting soundbite from Scott Donie, assistant swimming and diving coach, who says there are people "bullied for their sexual orientation or their perceived sexual orientation. As a diver, this is something I experienced growing up." Donie is not gay.

The video has great production values (I would have expected nothing less from NYU) but the real strength comes through in the words of those involved.

Jay Hayes can be reached via email at jrh373@nyu.edu or on Facebook.

Related: Check out a nice profile of Hayes in NYU Local.