Share All sharing options for: Nebraska coach Ron Brown must believe in slavery because the Bible says so 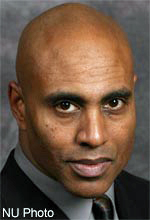 Brown has made headlines with his fierce opposition to gay rights, righteously citing the Bible as the source of his views. As he wrote on the site of his organization Freedmen Nebraska: "We believe the Scriptures, both Old and New Testaments to be the inspired Word of God, without error in the original writings."

Interesting, since this means Brown supports slavery. The Bible says so, both in the Old and New Testaments. It seems like an odd stance for an African American to have, but Brown says we can't argue with the Bible. As it says (among numerous passages):

You may purchase male or female slaves from among the foreigners who live among you. You may also purchase the children of such resident foreigners, including those who have been born in your land. You may treat them as your property, passing them on to your children as a permanent inheritance. You may treat your slaves like this, but the people of Israel, your relatives, must never be treated this way. (Leviticus 25:44-46).

Slaves, obey your earthly masters with fear and trembling, in singleness of heart, as you obey Christ. (Ephesians 6:5-9).

Brown has a historic soul mate in Jefferson Davis, president of the Confederate States of America during the Civil War, who was also fond of quoting the Bible to support his worldview:

"[Slavery] was established by decree of Almighty God...it is sanctioned in the Bible, in both Testaments, from Genesis to Revelation...it has existed in all ages, has been found among the people of the highest civilization, and in nations of the highest proficiency in the arts."

The Bible -- including Jesus -- never condemns the practice and offers guidance on how slaves should be treated. In addition to slavery, the Old Testament also includes prohibitions on eating shellfish, working on the sabbath or having a tattoo, and supports stoning adulterers and killing children who curse their parents.

Brown must believe all those things, since he supports both the Old and New Testaments. I would not imagine he would ever cherry-pick what parts of the Bible to believe and what parts to discard as irrelevant to modern society. That would not be very Christian of him.