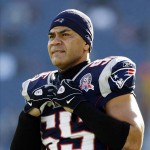 This is sad news about a player I watched and admired for years -- former NFL linebacker Junior Seau was found dead today at his home in Oceanside, Calif., from an apparent self-inflicted gunshot wound. He was 43.

Seau played a remarkable 20 seasons, the first 13 with his hometown San Diego Chargers, three with the Miami Dolphins and the final four with the New England Patriots. He was an All-Pro 12 years and played in two Super Bowls. He was beloved in San Diego and raised a lot of money for at-risk children.

Reports say that Seau shot himself in the chest so his brain could be preserved and studied by science to gauge the impact of football concussions to the brain. A similar suicide occurred last year with former Chicago Bears safety Dave Dureson. In 2010, Seau crashed his SUV in what police thought was a suicide attempt, though he said he fell asleep at the wheel.

Seau is the eighth member of the 1994 AFC Champion Chargers to have died, a shockingly high number given how relatively young these players are.

There is a Twitter feed where people are remembering Seau. This was just posted by Vince Wilfork, his former Patriots teammate: "[My wife] and I are heart broken about junior he's one of the greatest people I shared the field with he will always be 'Buddie Buddie' "

IT BRING THE COUNT TO 8!! 8 PLAYER THAT I PLAYED BALL WITH OR I KNOW IN THE NFL HAS DIED BECAUSE OF DEPRESSION. I'M SHOCKED!!!!!!