Share All sharing options for: Pro wrestler CM Punk apologizes for telling N.C. Amendment One supporter to kill himself 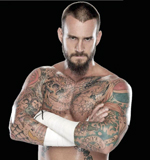 Pro wrestler CM Punk supports gay marriage and is opposed to North Carolina's Amendment One, which would ban gay marriage and civil unions (and which passed today). But he apologized for telling a homophobe on Twitter who said gays made him "sick" to "kill yourself." From the Daily Mirror:

CM Punk tweeted: "Same sex marriage should be legal. The fact that it's illegal is embarrassing."

Twitter follower EzeeKay of Walsall in the West Midlands disagreed, writing: "Man was meant for woman, and even the thought of homo's make me sick."

Punk retweeted this message and added "Kill yourself" in response.

The wrestler then apologized, saying his emotions got the best of him. He also had told another anti-gay tweeter to "drink bleach." His apology tweet: 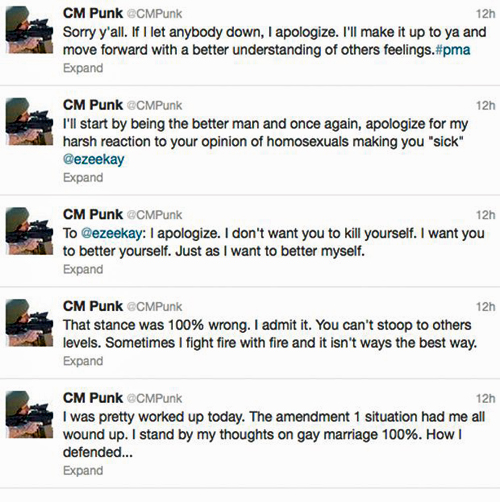 Any gay person, myself included, can totally understand the anger Punk felt, since we've all been there with homophobes. But his apology was appropriate since it made him look the better man. People also need to pause 30 seconds before posting a tweet, since once sent, it can't be taken back and we see this kind of stuff all the time.