Connor Barwin is proof of how attitudes about gay issues are changing in sports. After Outsports wrote about his tweets supporting same-sex marriage, he reached out and said he wanted to do an interview on the issue. He is the first pro team sport athlete to ever contact Outsports to talk about gay issues.

Barwin, 25, is a pass-rushing outside linebacker for the Houston Texans entering his fourth season. His 11.5 sacks in 2011 led the team and ranked him ninth in the NFL. He was a key cog in a Texans' defense that ranked fourth in the league in fewest points allowed, and helped the team to its first playoff appearance in franchise history. He grew up in Hazel Park, Mich., and attended the University of Cincinnati (where he majored in history).

Here is a Q&A from my interview: 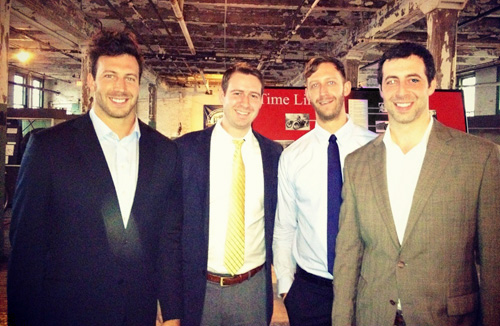 The Barwin Brothers: From left, Connor, Sullivan, Joe and Sean

Outsports: What is your interest in the whole same-sex marriage debate and why do you feel so passionately about it?

Barwin: It comes from my parents and my family. I have an older brother [Joe] who is gay. I would like to think I would feel as passionately even if I didn't [have a gay brother], but obviously that has been an influence on me.

I just embrace diversity and it stems from my parents. I've seen how important it is to my brother and have watched how it's changed over time and how it's changed in the NFL and how much more people are beginning to understand and accept gay people in all different areas of life. I feel I can make a stand in the position I'm in, especially in such a masculine sport and hope my support can maybe have a small effect on helping to change people's minds.

Outsports: How long as Joe been out to you and your family?

Our family was immediately accepting, right away. My oldest brother called him out on it when we were in high school. My older brother was a senior in high school and Sean said to Joe, “Hey Joe, you gotta tell me, are you gay or not gay?" You could kind of tell at that age and Joe just said “Yeah” and that was it. And then he came out and told my mom and everybody knew. I think people kind of knew beforehand, but that was how he came out. Everybody was accepting and he didn't have an ugly story that some people have had. 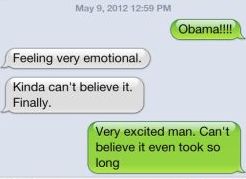 I remember the day Obama came out with his support [for same-sex marriage] and I texted him (Connor's text is in green).

It showed that even though there's no changes to the law, that what Obama did was just so special for him and had an effect on me and made me feel like I should publicly say something to show my support too.

Outsports: Were there negative comments to when you posted to Twitter supporting Obama's stance on same-sex marriage?

Barwin: There were, but there were very few. I had one guy that was tweeting me Bible verses. And there was another guy that said “I just unfollowed you.” I didn't necessarily know the kind of reaction I would get but I was blown away by the positive reaction that I got. The three tweets I did in support were retweeted 50, 75 times in a half hour. People saying thank you and 'so happy to see you say something.' There was overwhelming support and it was kind of encouraging and really nice to see.

Times are really changing and people are understanding that there's really no reason to have an issue with it. Embrace who people love and how they love.

Outsports: I saw where your teammate Shaun Cody made a funny tweet in reaction to yours where he said he can't wait to go to his first gay wedding. Did other teammates pick up on your tweets?

Barwin: I had some of my teammates say to me, 'that was good that you said that' or that 'I agree with you.' And Shaun Cody with his joke was showing his support for marriage equality as well.

Outsports: Are you and your brother Joe close?

Barwin: Oh yeah, it's me and three other boys [Joe, Sean and Sullivan]. My mom had four boys in five years, so we're all very close. 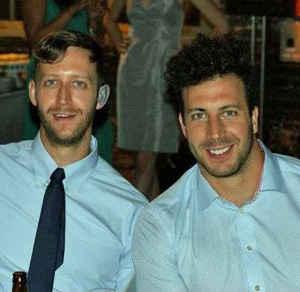 Outsports: What was your reaction when Joe came out?

Barwin: Maybe it's just because of my parents and how I was raised but I honestly just thought, 'Oh, my brother Joe is gay. I have a gay brother. What is this going to mean exactly?' But I didn't think anything about it. I remember when I was 12, my biggest question was did my brother choose to be gay or was he born gay? And according to my brother, it was just the way he was born, it's who he was attracted to.

Outsports: Talk a bit about your parents (Tom Barwin and Margaret Bailey) and how you were raised.

Barwin: Since I was born I remember my dad and my mom always embracing diversity and differences among people and that being the core of America and happiness and all those different things. And that goes along with equality and you should treat everybody equal and be fair and not judge people and dislike people because they are different, and embrace and enjoy people because of the differences they have.

I had a conversation with my dad and it's about being personal with people. That's the only way to get peoples' prejudice changed. If people are prejudiced, it's usually against people they don't know or have talked to. But when you finally actually meet these people and talk to them, you realize how ridiculous these prejudices are that you ever had.

Outsports: Do you know other gay people?

Barwin: I have a gay cousin and I have some gay friends in Houston.

Outsports: In your entire career in high school, college (University of Cincinnati) and pro (Houston Texans), do you know of a player who was gay?

Outsports: But the odds are statistically you had a gay teammate somewhere. Is it an issue in the lockerroom?

Barwin: It's not talked about. I've never had a conversation with any of my teammate about how they would you feel about having a gay teammate. I think right now it would probably be hard for a guy to come out in our lockerroom just because of the awkwardness. But I think they would be surprised at how welcoming people would be. I think at the end of the day guys care about how you play football, because we're all so competitive about winning that if there is a guy who comes out as gay in our lockerroom and he's a good football player, people aren't going to care about that. I think that's the honest truth. I think guys care about what kind of person they are, what kind of teammate they are and how good they are at helping us win.

It would help a lot if the player was a contributor to the team. If he was a guy that people didn't like his personality or wasn't helping on the team, I think it would be very hard for him. But I could be wrong. It's amazing how many people know relatives or friends who are gay, so I think it might not be as hard as some people think.

The first guy that does come out in the NFL might confide in some of his friends and it might spread and be accepted throughout the lockerroom. And people would just get to know he's gay and people will move on with football, the season and their life and realize it's not a big deal at all. There's nothing different about what they're doing. There's nobody having sex in the lockerroom, so there's nothing really different.

Outsports: Do people in the lockerroom speculate on who is gay?

Barwin: No, I don't think people do.

Outsports: How often do you hear gay slurs, like "fag" or "faggot" on the field or in the lockerroom?

Barwin: No, I don't hear it in games. I used to hear, and I mean generally,'fag' more often, but I honestly think in the last couple of years I really don't hear it anymore. I think when I did hear people say it before, they didn't mean it in an offensive way -- it was just kind of an ignorant thing -- but I think now people understand it's a pretty offensive word and people aren't using it as much. It shows you the culture is changing and people's opinions are changing and it's happening quickly.

I know people who would say it [a gay slur] and they honestly didn't mean it to be offensive to gay people but they just said it growing up. But I think now people realize you sound ignorant when you say that.

Outsports: Do you think with gay marriage, do you think we'll look back 10 years from now and wonder what all the fuss is about? Is this the beginning of a general acceptance of it in society?

Barwin: I definitely think it is and I agree with you 100 percent that people are going to look back and be amazed that so many people had a problem with it.

Outsports: How do you think the fans in Houston would react to an openly gay player?

The first guy that comes out – great player or mediocre player – I think he will be a hero and be accepted. People are just waiting for it to happen.

Outsports: On a less serious note, Shaun Cody tweeted a picture of you in January that said you were wearing the “sluttiest uniform in playoff history.” What was that about?

Barwin: That was just him cracking a joke. He's a good friend of mine and he was just being funny because I jumped up to block a field goal and I lifted my hands over my head and my jersey kind of rose up and you can see my stomach, which is not very normal to see a football player's stomach in the middle of a play. He was just trying to be funny on Twitter and I saw you guys picked that up on Outsports.

Outsports: You got several favorable comments. Guys think you're hot.

Barwin: I don't mind at all if guys think I'm hot. It's a compliment.

Barwin: Oh, trust me, he's told me many times! He's known about that for a while. He tells people: 'Go to Sean Cody.com and check out my website.” He's an interesting guy.

Barwin: I am really thankful for talking to you and trying to help and do whatever I can to spread the message. Things are changing rapidly, very rapidly.