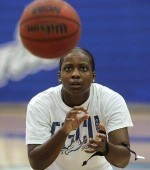 The issue of homophobia in women's sports is one that is pervasive and still exists even though the climate has changed. Over the years we have heard of numerous female coaches and players who are lesbians (and whose orientation is known within their circle) but who don't want to come out publicly because of the stigma that exists.

An excellent series of three articles by Seth Soffian of the The News Press in Fort Myers, Fla., looks at the successes and hurdles that remain. He focuses on athletes at a local school, Florida Gulf Coast University.

Homosexuality in men’s sports remains a headline-making topic, especially as a highly visible barrier still not crossed by an active athlete in a major U.S. sport. But despite limited visibility, homophobia in women’s sports may affect a far greater number of lives.

Impacts range from major blow-ups, such as lawsuit settlements by U.S. universities for discrimination, to more insidious, daily occurrences, such as ostracism, negative recruiting, hiring (and firing) inequities and simple fears to play or coach sports.

“If you’re an athlete and you’re a man, nobody thinks you’re gay,” said Pat Griffin, professor emeritus of the Social Justice Education Program at the University of Massachusetts and the director of the Gay, Lesbian and Straight Education Network’s Changing the Game project, which targets homophobia in K-12 athletics.

“If you’re a women athlete, the stereotype is you are a lesbian, or you must be playing on a team with a bunch of lesbians. As long as that is the stigma, women’s coaches are much more defensive and fearful about that kind of label. And as long as it has that kind of power, it makes it more likely that coaches and parents will use that (against women).”

Soffian finds a success story in FCGU basketball player Joyce Iamstrong, who was accepted by her team and who had no problem bringing her girlfriend to watch the NBA Finals with her teammates. At the same time, he finds a series of tweets by FCGU female athletes, including what is apparently a well-known homophobic slur about players wearing ribbons in their hair: “Golden rule of softball: ‘No bow, lesbo,’ "

The series, which also features an article on a coach fired for raising gender equity issues, does not break new ground but is worthwhile for keeping the issue in the spotlight and reminding us that a lot of work needs to be done.