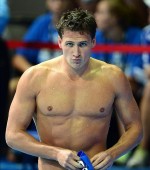 The biggest takeaway from the highly entertaining ESPN the Magazine piece on sex in the Olympic village is that if you want to have fun as an Olympian, be single.

Former U.S. soccer player Judy Foudy remembers the village cafeteria, where she would "graze over our food for hours watching all the eye candy, wondering why I got married."

How much sex will there be among Olympians? Lochte guesses that 70% to 75% of Olympians will hook up, and the organizers are prepared by having 100,000 condoms on hand in the village. The best bodies? Swimmers and water polo players, according to one U.S. female athlete, while another called male gymnasts "lovable little Ewoks."

This is not surprising, given that the Olympics are comprised mainly of young, super-fit athletes bursting with sexual energy and surrounded by the buff and the beautiful. Said former American javelin thrower Breaux Greer:

On the way to practice fields, "the girls are in skimpy panties and bras, the dudes in underwear, so you see what everybody is working with from the jump. Even if their face is a 7, their body is a 20."

The article by Sam Alipour, worth reading in its entirety, does not get into the obstacles facing gay athletes, or whether it's as easy for them to hook up in the village. Is there an underground scene or do gays and lesbians have to score online or at clubs? There is, though, one anecdote from Greg Louganis:

At the 1976 Montreal Games, three-time Olympic diver and four-time gold medalist Greg Louganis, appearing in his first Olympics at age 16, developed a kinship with the boys on the Soviet Union diving team and soon found himself partying in their rooms. "Once events were over, our entire diet was caviar, vodka and Russian champagne. It was crazy," Louganis says. He was particularly struck by the Russians' sense of sexual liberation. "Culturally, they're more openly affectionate toward each other, which I just drank up, since I was still discovering who I was. But I had my eyes on one Soviet. I'd curl up in his lap; we'd hug and cuddle. I felt so protected." It didn't progress beyond that, Louganis says. "He was hooking up with one of the other male divers on the team" -- not to mention married.

For the first time, NBC will be streaming online every minute of every event live. I have a suggestion for the network -- put cameras in village bedrooms, charge for access, call it "Olympics After Dark" and rights fees recouped.