It's time for the International Olympic Committee to fight homophobia

Share All sharing options for: It's time for the International Olympic Committee to fight homophobia 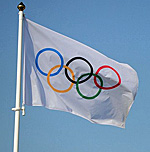 By Marc Naimark
Special to Outsports.com

When the sports world used its power to help bring about the end of apartheid, it set a noble precedent. A powerful lobby came together to call on the authorities of world sport to say no to a grave injustice. Where is the lobby to act against the homophobia affecting millions and the sexism affecting billions? We need to be that lobby, and the International Olympic Committee must be the target for action for change in sport.

The members of the IOC have appointed themselves as the leaders of world sport. The IOC is a club, its (mostly male and heavily aristocratic) members elected by no-one but their predecessors. The IOC is not the product on an international treaty, nor an agency of the United Nations.

It owns an event, and to be part of it, the rest of sport must be part of the structure of the IOC. Sport is a hierarchy with the IOC at the top and the various National Olympic Committees and the International Federations for the various IOC-recognized sports (recognition that goes beyond just Olympic sports) below.

The IOC has the power to change the world, to change laws, to change the actions of governments. In defense of the “autonomy” of sport, the IOC has often banned or threaten to ban from the Olympics countries whose governments “interfere” with sport (Kuwaiti athletes have only just recovered the right to participate in the 2012 Olympics under their country’s name and flag after their government bowed to the demands of the IOC).

The IOC imposes that countries that host the Olympics change their legislation, notably in terms of liability, intellectual property, and even fundamental rights, with the goal of protecting its considerable commercial interests.

The IOC Is clearly very powerful, and can get things done when it wants to.

“The practice of sport is a human right. Every individual must have the possibility of practicing sport, without discrimination of any kind and in the Olympic spirit, which requires mutual understanding with a spirit of friendship, solidarity and fair play.”

“Any form of discrimination with regard to a country or a person on grounds of race, religion, politics, gender or otherwise is incompatible with belonging to the Olympic Movement.”

So how is it that sexism and homophobia remain endemic in sport? And why do the IOC and its member federations regularly host their events in countries where homophobia and sexism are the law?

It's certainly not for want of attention to these issues. The Federation of Gay Games has over the last few years called for a dialog with the IOC on concrete action on these matters, a request that received a polite but negative response. Others have been at this for longer, including the Atlanta Plus Committee, who continue to work for change on sexual discrimination (and let us applaud these women who since the Barcelona Olympics have taken to the streets to call for reform of the Olympics, a campaign that has achieved real results, despite the distance that remains). Organizations like the Human Dignity Trust and the Peter Tatchell Foundation have recently launched several appeals to the IOC to ban the participation of countries that penalize homosexuality. Beyond sexism and homophobia, at each Olympics, there are calls for protection of human rights, calls which are as a rule ignored.

As an anecdote, I participated at an event at the French Olympic Committee headquarters a few weeks ago where the organizer of the event, a noted consultant for sports organizations, particularly in the Middle East, took pleasure in “predicting” that the minute the fireworks of the closing ceremony of London faded, we would hear calls for a boycott of Sochi, Russia, the host of the 2014 Winter Olympics. For him, this was clearly business as usual, the work of attention-seeking parasites impotently attempting to interfere with the turning gears of world sport. At the same meeting, another participant asked the representative of the Russian embassy if he feared the impact of his country’s disastrous human rights record, to which the diplomat responded in fake astonishment that he had no idea what the questioner might be talking about.

Yet if the IOC wants sport to be considered a human right, shouldn’t it be just a little concerned about the defense of human rights?

In the face of IOC inaction, how to bring about change? There are many organizations and individuals that share similar concerns: coordination among them is essential. That is why the Federation of Gay Games (FGG), with the support of the European Gay and Lesbian Sport Federation (EGLSF) and the Gay and Lesbian International Sport Association (GLISA), has called on interested parties to meet at Pride House 2012 on Aug. 4 to discuss concrete action on the fight against homophobia in the Olympic Movement. Participating in the meeting will also be the Peter Tatchell Foundation and Jonathan Cooper and Mark Stephens of the Human Dignity Trust.

The terms of the discussion are open, but it is clear that we must first and foremost demand accountability from the IOC. If it is the leader of world sport, it cannot push off homophobia, sexism, and abuses of human rights as the responsibility on host countries or international federations. We know the IOC has great power. It is time to use that power to make the Olympic Charter a reality. And while LOCOG, the host committee of London 2012, has done great things for diversity and inclusion, their achievements can only become an Olympic legacy if the IOC makes this happen.

We invite everyone able to attend to join us in London for our first encounter, and to follow the progress of these efforts at pridehouse2012.org and pridehouse.gaygames.org.

(The public meeting will be held on Saturday Aug, 4 at 11 a.m. Interested parties should indicate their intention to attend by writing to pridehouse2012@gmail.com.)

Marc Naimark is Federation of Gay Games Vice President for External Affairs and a member of the Sports, Site Selection and Development committees.