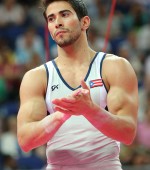 Day 2 was really the first day of full competition with medals being awarded. The biggest story was Ryan Lochte winning the gold in the 400-meter IM, while Michael Phelps finished out of the money.

Men's team gymnastics started with the U.S. on top after Day 1, with the final set for Monday. American Danell Leyva finished first in the individual all-around.