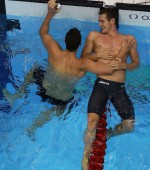 Day 3 of the London Games had what for me has been the sweetest moment of the Olympics so far, when South Africa's Cameron van der Burgh dedicated his swimming gold to the late Alexander Dale Oen. I love the image in this gallery of van der Burgh lying in the pool with a competitor's arm on him.

United States midfielder Michelle Vittese (9) tries to move the ball while being defended by Germany defender Julia Mueller (28) in the first half of field hockey. (Photo by: Christopher Hanewinckel-USA Today Sports)

United States defender Shea Buckner (6) celebrate on the bench after a goal is scored in the second quarter of the preliminary round against Montenegro. Mandatory

United States players celebrate a goal in during the third quarter of the preliminary round against Montenegro. (Photo by: Andrew Weber-USA TODAY

Luigi Mastrangelo #1 of Italy celebrates a point with teammate Simone Parodi #3 in the second set against Poland during Men's Volleyball. (Photo by Elsa/Getty Images)

Liam Tancock of Great Britain waves to the crowd after competing in the Men's 100m Backstroke semifinal. (Photo by Adam Pretty/Getty Images)

Greenwich, United Kingdom; William Coleman (USA) rides on Twizzle with the Queen's House and London skyline as a backdrop on Day 2 of the team dressage. (Photo by: Kirby Lee-USA Today Sports)