Share All sharing options for: Photos: Tim Tebow creates stir by running shirtless in the rain 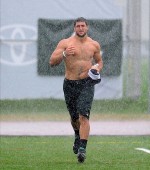 New York Jets quarterback Tim Tebow is finally realizing that his every move in the huge media market will be scrutinized, even when he decides to take a jog in the rain at training camp.

Tebow caused a stir, making the front page of the tabloids when he went for a run during a rainstorm. From the New York Daily News:

I can’t tell you how many times probably in Florida or Denver after practice I would do sprints back and forth with (my shirt off) and jog off the field and never think about it again and it never would get reported…and now it does,” the Jets’ backup quarterback said Monday after practice. Tebow said his shirt was wet and heavy on Saturday and thought nothing of it when he took it off before running off the practice field.

Photos of Tebow during his run following the second day of training camp at SUNY Cortland. Mandatory (Photo by: Rich Barnes-US PRESSWIRE):