Olympics 2012 photos: Meet the men of the Australian swim team

Share All sharing options for: Olympics 2012 photos: Meet the men of the Australian swim team 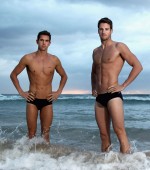 Swimming is one of Australia's national sports and their star swimmers get rock star treatment. Stephanie Rice is the queen of Aussie swimming, while the new king looks to be freestyler James Magnussen. The 21-year-old is the current world champion in the 100-meter freestyle and the favorite for gold in London. At 6-5 and 195 pounds, he is also the hottest Olympian Cyd and I have seen so far.

Magnussen and other members of the Aussie men's team posed for a series of photos this spring on Sydney's Manley Beach in the run-up to London (with a bonus shot of Magnussen flexing after qualifying for the Games). They all wore black Speedos.