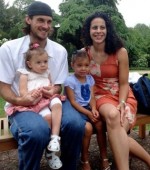 The Kluwes: Chris and Isabel with daughters Remy (left) and Olivia

Minnesota Vikings punter Chris Kluwe has produced a second terrific ad for Minnesotans for Equality against a ballot initiative this November that would write marriage discrimination into the state’s constitution.

Kluwe, who gave a must-read interview to Outsports where he talked about his support for gay marriage and gay players in the NFL, said he will do more ads in the run-up to the election.

Here is what he said in this 50-second spot:

Hi, this is punter Chris Kluwe. Join me and the majority of Minnesota sports fans by saying no to the marriage discrimination amendment this November.

Excluding gay couples from marriage is a meaningless and reckless restriction of individual freedom and basic human rights. This amendment is an extreme change to our constitution, making it impossible to change for decades to come.

To deny an entire group of people the ability to be legal couples is anti-American and anti-freedom. As a devoted husband and father of two, I can't imagine the state of Minnesota not recognizing my love for my wife Isabel. We would welcome and respect the equal rights for gays to experience the same joy and privileges of marriage that we do.

Please don't limit the freedom to marry for anyone. This November, vote no to the marriage discrimination amendment. It's the right thing to do.

Someone like Kluwe is a very effective spokesman and I hope his voice on this issue is heard all over the state as the election nears.