Scott Norton kissed his husband on ESPN after a win and the network didn't shy away from it.

In what might be a first, ESPN this weekend showed an openly gay male pro athlete kissing his husband and they did not shy away from describing the relationship. The event was the 2012 PBA Chameleon Championship in Las Vegas, held in November, but shown on TV this Sunday.

Scott Norton won the event over Jason Belmonte and afterward broke down and cried in memory of a friend who had died. He was then shown kissing his husband, Craig Woodward, as they exchanged affectionate words (video below). During the telecast, ESPN's announcers referred to Woodward as Norton's husband or spouse.

I am indebted to JW, himself gay and a bowler, and Jaime Perez, who runs iabowling.tv, and shoots footage of bowling events, for their reports. Perez and his partner are themselves bowlers and friends with Norton. 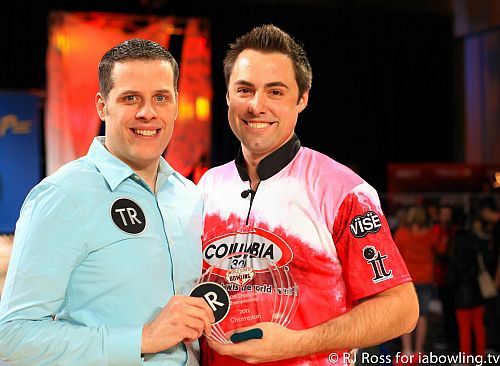 The telecasters were very matter-of-fact. Scott's husband, Craig, was introduced as his husband or spouse interchangeably. Scott Norton defeated 48-time champion Walter Ray Williams and two-handed phenom Jason Belmonte on his way to the win. He had to plow through the stepladder field from fourth place to the championship, beating the first Middle Eastern player (from the Bahrain national team) in his first match. Norton was very complimentary towards the player who soldiered through an attack of gout in the first match and had Scott on the ropes midway through the match.

Some homophobes on Facebook complained Jason should have won because he was not gay! Ugh! It was nice to see the telecasters step into the 21st century and treat Scott's homosexuality as just a matter of fact and not a sensation. The focus was upon how well he was playing. They did mention that Scott came out after his win in 2011 during the telecast. They also mentioned that his first title win in 2011 helped him come out the shadow of his mother, Hall of Fame bowler Virginia Norton, but that this second win defined him as a true threat on tour.

... His accomplishment is notable because this is his second win and that makes him a rising star on the PBA tour, who happens to be gay and married to a man. Just good stuff all around. I am proud of him. I have been a pro since 2001 and have coached youth bowling since 1991. I used to bowl in IGBO [gay] leagues in the 1990s but left and joined the tour when I was told I was getting too good (220+ average). I'm a bit of a journeyman on the regional circuit and win cash infrequently. It's awesome to see what the next generation is doing.

Here is how ESPN showed the final minutes of the match, and then the kiss:

From Jaime Perez at iabowling.tv, behind-the-scenes at the event, with more with Norton and Woodward: