Share All sharing options for: Remembering an even weirder sports story than Manti Te'o: Mike Danton 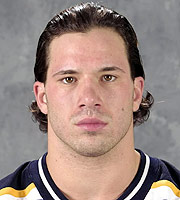 With the sports world gripped by the story of Notre Dame linebacker Manti Te'o, I've been brought back to the last "most bizarre sports story I've ever heard." It involved St. Louis Blues defenseman Mike Danton hiring someone to kill his agent, David Frost. Speculation flew about the true nature of the relationship between the men because court documents pointed to a romantic relationship between the two. Both men denied that part of it. Danton eventually pled guilty and served five years in prison.

Danton has since been released from jail and has played professional hockey in Europe since 2011. He even saved a teammate's life a couple years ago with skills he learned in prison. That's a story coming full circle.