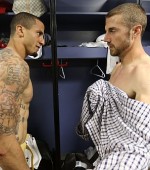 Super Bowl XLVIII is set with the San Francisco 49ers meeting the Baltimore Ravens. The Niners are early 4.5-point favorites. It's the first Super Bowl matching head coaching brothers, Jim (49ers) and John (Ravens) Harbaugh. It will also be the last game of Ravens linebacker Ray Lewis, the most annoying player in the NFL.

I hate the Patriots, so was thrilled to see the Ravens roll them, 28-13. But it also mean that we will hear Lewis praising God for two straight weeks in an act that wore thin 10 years ago. He is insufferable and the cameras record everything he does, from his dopey pregame dance to him thinking God has something to do with the Ravens' playoff run (maybe He took the Ravens and the points the last two weeks). If Lewis gets the flu and misses the Super Bowl, I don't care who wins; if he's healthy, it's go Niners.

The Harbaugh angle is understandable but that too will get old by kickoff. I'd much rather hear about Niners' quarterback Colin Kaepernick's 115-pound turtle. As for a gay rooting interest, it's hard to be more gay-friendly than San Francisco. On the other hand, Maryland now has gay marriage and linebacker Brendon Ayanbadejo is a huge gay-rights advocate. On that count, it's a wash.

San Francisco's 28-24 comeback over Atlanta was the better game and I felt bad for Falcons QB Matt Ryan, who was obviously injured on the team's last drive and came up short. But the better story is the continuing underperformance by the Patriots in the playoffs.

QB Tom Brady and Coach Bill Belichick started 9-0 in playoff games, but have gone 8-7 since, with no Super Bowl titles since 2004. Brady in particular has not played well in a playoff loss since the 2006 AFC Championship Game. Since then, he has led the Patriots to 14, 14, 21, 17 and 13 points in their last five losses. This season, the Patriots averaged 34 points a game, but scored only 13 Sunday and were shut out in the second half. The Patriots can crush teams when on a roll, but they come up small when the game gets tight.

It is obvious that the Ravens and Patriots hate each other. "These are the most arrogant pricks in the world starting with Belichick on down," Ravens linebacker Terrell Suggs said after the game. ""Tell them to have fun at the Pro Bowl. Arrogant F---ers." While Suggs backed down slightly, you can expect every Patriots player and fan to be huge 49ers fans in two weeks. Sports hatred is fun!

I will have my Super Bowl for the Clueless up next week. My early vibe says the 49ers will win, but after the way the Ravens have been playing, that's not written in concrete.

Here is the hottest photo I saw from the championship games. A shame that Alex Smith has his shirt half on: 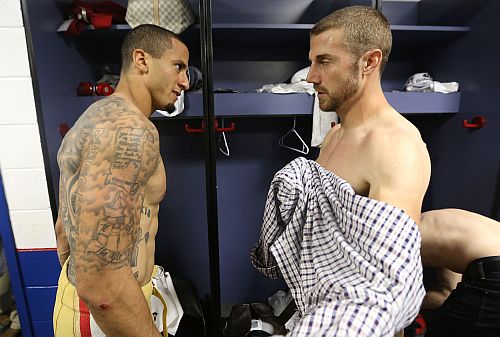 (Quarterbacks Colin Kaepernick , left, and Alex Smith of the San Francisco 49ers talk after the 49ers defeated the Atlanta Falcons 28-24 in the NFC Championship game at the Georgia Dome in Atlanta. Photo by Streeter Lecka/Getty Images)