Share All sharing options for: Michael Phelps channels his inner slacker in cheering on Baltimore Ravens 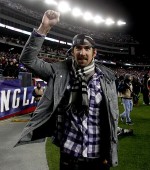 Now that the Olympics are a distant memory, swimmer Michael Phelps is indulging perhaps his real sporting passion -- cheering on the Baltimore Ravens. The Baltimore native is a huge fan of the Ravens, a constant presence at games, and was on hand as they beat the New England Patriots in Foxboro, Mass., to reach the Super Bowl.

At Sunday's game, Phelps sported what might be called his slacker look -- backward baseball cap, Burberry scarf, mustache and trimmed beard. He looks like he should be working at a Starbucks. He also wore a purple shirt in honor of the Ravens and purple underwear, which he showed to onlookers in the locker room after the game.

“I think it’s just cool for the city of Baltimore,” Phelps said. “I know how the fans are with their sports with every team, and just being able to come here. After seeing the support out there on the field, it’s unbelievable. Everybody just went crazy. It’s amazing.”

I prefer the clean-shaven Phelps, preferably in a Speedo, but when you've won 18 Olympics medals, you can pretty much look however you want. 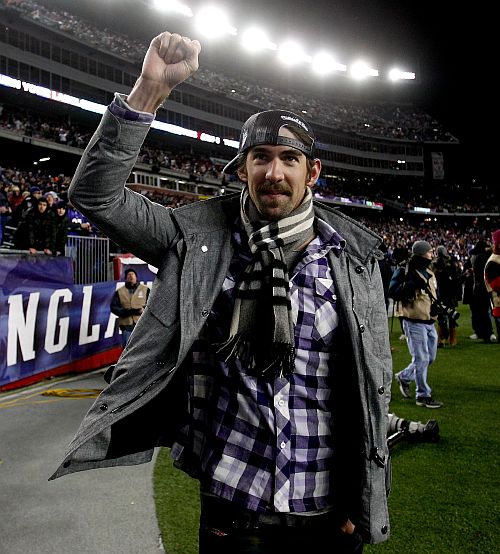 Olympic Swimmer Michael Phelps looks on prior to the 2013 AFC Championship game between the New England Patriots and the Baltimore Ravens at Gillette Stadium on January 20, 2013 in Foxboro, Mass. (Photo by Jim Rogash/Getty Images)