Share All sharing options for: San Francisco 49ers coach Jim Harbaugh would be fine with an openly gay player 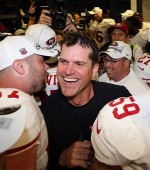 If a player on the San Francisco 49ers came out as gay, Coach Jim Harbaugh said he would treat him as he would any other player. Harbaugh will coach against his brother John in the Super Bowl next week between the 49ers and Baltimore Ravens.

“I ask all players to play through their own personality and be who they are. What you ask of a player is to be a great teammate and be a good player. My expectations would be the same," Harbaugh said. “Personally, there’s no discrimination in my heart.”

Harbaugh made these comments last month after being asked by someone from the San Francisco Chronicle's IPad 49ers magazine. They were excerpted by the paper's 49ers blog, so it is unclear whether Harbaugh said more about the subject (the IPad site is subscription only and I don't have access).

Some 49ers players were also asked about having a gay teammate and most were said to be supportive, though some raised reservations about showering and sharing a locker room, the blog said.

“At the end of the day, we are all family in this locker room, and we accept each player for whoever they are,” said linebacker Larry Grant.

“Whatever makes you happy, do it,” cornerback Tarell Brown said. “I just feel like, you shouldn’t hide it. At the end of the day don’t be embarrassed with what you are, or what you do. If you are that way, that’s you.”

Harbaugh's comments should be the default answer any coach gives, but it's still news since no active player has ever come out. The 49ers are still the only NFL team to have produced a video for the It Gets Better Project.