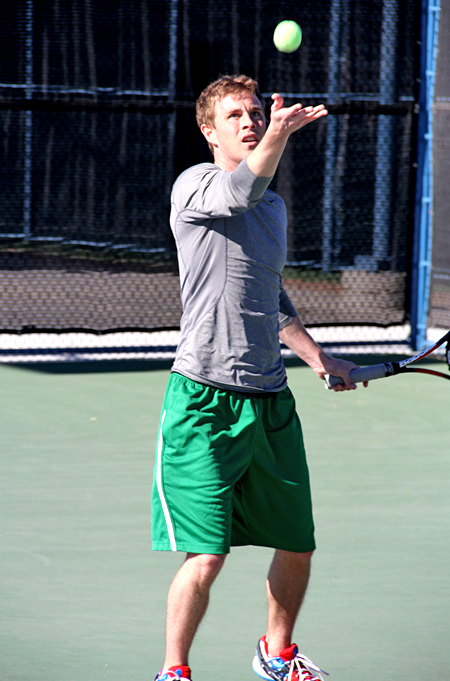 There were boyfriends on the same hockey team, and partners playing tennis. There was a father-son duo of teammates in softball and an almost-all straight basketball team.

The 6th annual Sin City Shootout Sports Festival, held in Las Vegas Jan. 19-21, certainly criss-crossed the LGBT rainbow. There were 5,271 registered participants, an increase of about 1,500 over 2012, in the 12-sport event that quickly is becoming a must-attend weekend event for athletes of all skill levels.

There were only two registered participants for bodybuilding, down from about 12 last year, so the competition was not held. Still, event organizers expect the sport back in 2014.

“As a whole, the 2013 Sin City Shootout Sports Festival was a success,” said Eric Ryan of Los Angeles, the tournament director and event creator. “With an event as large as this is, there always are going to be little, minor hiccups. But still, I think it was a tremendously successful event for everyone.

“My biggest desire was for every person to have a great weekend on the field, off the field. I think that happened.”

It’s no surprise that high-ranking representative from the World Outgames and Federation of Gay Games were here, promoting their 2013 and 2014 events, respectively, to this energetic LGBT sporting crowd.

“It was an amazing tournament,” said Josh Madeline, who played shortstop for the Houston Revolution, which finished second in the 24-team B-Division of softball. “The tournament was really well organized, on and off the fields. The host hotel was fantastic and the [evening] events were great. The competition on the field was on [par] with the Gay Softball World Series.”

Brian Kupersmit, the president of the predominantly-gay Chicago Metropolitan Sports Association, played C-Division softball in Las Vegas and had nothing but praise for the multi-day event.

“The Sin City Shootout is an amazing tournament experience and a celebration of how far gay sports has come over the last several years,” Kupersmit said. “Having gone to the tournament each of the last four years, Shootout director Eric Ryan and his team have created a destination event. Their breakthrough concept of a mega tournament with the backdrop of Las Vegas serves as inspiration to me as to what’s possible for the future of gay athletics.”

“I really thought it was a phenomenal event, on and off the ice, and I think everyone had a great time,” said Brynne Van Putten, of Laguna Beach, Calif., who skates for the gay Los Angeles Blades and was the hockey coordinator for the four-team, 56-player hockey tournament.

Van Putten said the Sin City Shootout, “is quickly becoming a mini Gay Games—there really were a ton of LGBT athletes at this event.”

But The Sin City Shootout reached well beyond the gay community. Jake Mason, who coordinated the dodgeball tournament, speculated that only about 70 percent of the participants in his sport were gay. And in basketball, there was a gay-friendly team with only one gay player.

“It was great to see so many gay athletes and allies from around the world all coming together for one big sports festival,” said Tony Tiet, of Chicago, who skated for the championship-winning Red Cosmos in ice hockey.

The first time tennis was offered in the Sin City Shootout featured 48 players (men and women), including a former nationally-ranked male player from the Junior levels who played doubles and also softball; plus a left-handed former college player who now calls Las Vegas home.

Jim Redding and Jim Lash were the tennis co-directors. Off the court, they are celebrating 10 years together in April.

“The (tennis) turnout is a little smaller than we hoped for, but we’re really happy how it went,” Redding said. “Everyone had a blast and it was (held) at a great complex.”

Players came for tennis from Florida, Maryland, California and elsewhere.

Chad Kawahara split time between tennis and softball, teaming on the court with Dan Garza. “It’s just amazing to see someone play at the level that he does,” Redding said.

The inaugural one-day, four-team ultimate Frisbee tournament brought 26 players together, ranging in age from 18 to 48.

“The tournament went really well. We were really pumped up to be playing some ultimate,” said Seth Harrington, of Los Angeles, head of Big Gay Frisbee, who watched the action from the sidelines after an ankle injured left him on crutches.

“There was good competition and good sportsmanship throughout.”

So what is ultimate?

The sport is played on a long field (almost the size of a football field) and filled with non-stop running.

A gay ultimate league started four years ago in Los Angeles and has since blossomed with 200 members.

“There were a lot of underdog teams, some really close games and some amazing plays. The highlight really was how into it everyone was, screaming and yelling, and just having a great time.

“I know I speak for others in dodgeball when I say, I can’t wait for next year – and I know it will grow and get bigger, no doubt with more teams.”

There were 23 basketball teams, split among four divisions, including new teams to the National Gay Basketball Association, which organized and ran the hoops portion of the Sin City Shootout, from Portland (Ore.) and Dallas.

“The competition at the Sin City Shootout was great,” said Mark Chambers, 48, of Long Beach, Calif., the NGBA president.

There were six teams in the top-tiered open division, 11 intermediate, three recreational, and three novice. This was the third basketball tournament in the Sin City Shootout.

“I think parity is coming to gay basketball, which is a great thing,” said Chambers.

The two-day tournament, held at the Tarkanian Basketball Academy, featured team which had one gay player, called Orange Country Balls Deep; and a predominantly-female team, the O.C. Lady Huskies.

“The competition always seems to be getting better and better,” Chambers said.