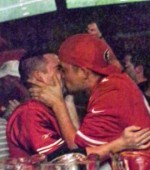 Part of the photo from Sports Illustrated

The current issue of Sports Illustrated, the one previewing the Super Bowl, has something I never thought I would see in a mainstream sports magazine -- two male fans kissing. Not the peck on the cheek you might see from a European soccer player or a drunk LSU fan, but two fans wearing San Francisco 49ers gear in a passionate lip-lock celebrating the team winning the NFC Championship.

The photo by Deanne Fitzmaurice was taken at Hi Tops, a San Francisco gay sports bar, and accompanies an essay by Bay Area resident and SI writer Chris Ballard on the diversity of the 49er fan base:

The essay and photo are on Page 48 of the magazine. It looks like Hi Tops has a pretty hot and happening scene, and this Sunday I imagine it will be crazy there.