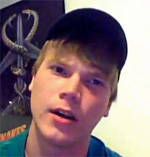 We wrote about Canadian hockey player Scott Heggart's 365 YouTube videos about a year ago. Now Canadian Television Network is airing a lengthy special on Heggart, his coming out, and his new-found activism. Heggart talks in detail about his near suicide attempt -- he had chosen a knife to the wrists -- as he was coming out of the closet. CTV also dives into his coming out in the locker room. The piece is accompanied by an essay from reporter Kevin Newman, whose son, Alex, came out of the closet.

Heggart has recently joined the You Can Play project and is speaking more and more to groups of youth. Patrick Burke calls him "the best LGBT athlete I've done speaking engagements with so far." We haven't heard the last of this kid -- expect big things in the coming months and years.