Share All sharing options for: Calls grow for New Zealand All Blacks rugby player to come out 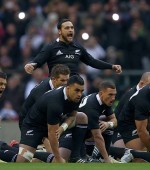 Member of the All Blacks at a December match. (Photo by Julian Finney/Getty Images)

The All Blacks are the team in rugby-mad New Zealand, so if a player came out as gay that would be huge news there, as big as an NFL player coming out in the U.S. Calls are now coming from New Zealand for such a person to come forward and one openly gay TV broadcaster says he slept with a gay player once. Said Steve Gray:

""I can definitely say there are gay All Blacks because I have slept with one. Everyone always asks what his name was, but I can't remember. I don't know who the All Blacks are. But at the time I checked with a friend and it was totally true."

Gray says there have been several gay All Blacks in the past, and while he hoped a current one would come out while playing, he realizes it will be tough. His comments were echoed by former All Blacks player Craig Innes.

"I'd admire someone who had the guts to do something like that," he said. "It would obviously take a very brave person to do it, but if you look at [former Australian player] Ian Roberts, who is probably the toughest, meanest rugby league player to ever play the game, he came out a few years ago and people hardly batted an eyelid."

We are seeing these types of calls nearly weekly in myriad sports. Now all we need is the first player in [pick a sport] to take the plunge.