The largest LGBT sporting event of the year in North America is set for Las Vegas as the 6th annual Sin City Shootout Sports Festival offers 12 sports with about 5,250 registered to participate.

More than 6,000 are expected to play and watch, with about 95% of all rooms at the event’s host hotel -– the Tropicana Las Vegas -- filled with LGBT attendees. That’s more than 1,000 rooms a night booked by the LGBT community.

The four-day event, running Jan. 18-21, is expected to have a $4 million impact on Las Vegas, according to event organizers and the Las Vegas Convention and Visitors Authority.

The main goal, as it is every year, is to make this about the athletes, their families, friends and spectators. Everything we have done is with them in mind and to make it a great weekend that they look forward to every year,” said Eric Ryan, tournament director and event creator. “The real judgment comes 180 days from now when registration opens for the 2014 event and how soon it fills up. That is the true indicator of how well we did in 2013.” 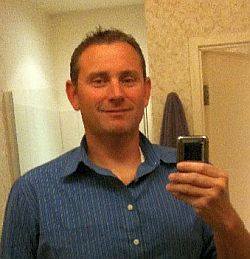 Ryan, 42, lives in Los Angeles and has played or participated in multiple sports, including golf, snowboarding and boating. At the Sin City Shootout, he will play softball – along with about 3,000 others, spread over 170 teams.

Softball registration was sold out in 30 days.

“As far as I know, this has never happened (so quickly) at any LGBT softball tournament, (certainly) never at the Sin City Shootout Sports Festival,” Ryan said.

Kevin Riddle, 47, a utility player for the C-Division Nashville Chaos, has played softball in all five past Sin City Shootouts – and he has nothing but praise for the annual event.

“In my opinion, this is the best tournament in the country,” Riddle said. “It is superbly run; everything is nice and professional. The organizers really work their tails off.

“And the competition is quite tough, (Gay Softball) World Series-caliber.” 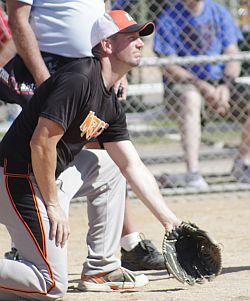 Cameron Turner, the player-manager for the Chicago Menace in the top-tiered A-Division, will be back with his team for its second shot at softball glory.

“We decided to play last year really just for fun, and had a blast, even though we didn’t fare too well,” Turner said. “We took a small roster last year and are doing the same this year, and hopefully we will pull it together and have a good tournament.

“Regardless, I know we will have a great time.”

Other popular sports in the Sin City Shootout include basketball, ice hockey and dodgeball.

Participants have registered from as far away as Australia, Ryan said. The majority of participants are men, though there are co-ed and women-only divisions for some sports

Wait, is bridge a sport? “I know the sport uses a very important muscle in our body, the brain,” Ryan said.

Muscles certainly will be plentiful in the physique competition.

“When you go to any gay pride event, you see hundreds of men and women walking around with very little on (and) they tend to have a great physique,” Ryan said. “It seems when they see ‘Physique Competition’ they think of Arnold Schwarzenegger or the huge bodybuilders. Physique is not based on how huge the athlete is, but the overall physique of the person. A small, lean athlete has the same chance to win as a huge mountain of a man.”

Golf is a new sport to the Sin City Shootout Sports Festival, and will be run by the Stonewall Golfers of Palm Springs – with more than 50 golfers registered.

“We’re pretty excited for this tournament. It will be competitive, yet fun and social,” said Diana Streit, the president of the Stonewall Golfers and the co-coordinator (with Lee Ericson) for golf at the Sin City Shootout Sports Festival.

“What it takes is someone from one of those sports to step up and say, ‘I will be the coordinator for the sport,’ ” Ryan said. “Each sport plans, runs, regulates and handles registration for its own sport. Some of those sports would benefit from the ability to use the ballrooms (at the host hotel) at no expense because of the number of hotel rooms we book. This is where all of us together make our buying power greater to help each sport grow at the Sin City Shootout Sports Festival.”

Ryan, a firefighter for more than 20 years, said the event’s long-term goal remains consistent: “to give the athletes the best we can.”

“That goal has never changed and is the way I try and look at each event we do every year. If we give them the best we can, the rest will take care of itself and the event will continue to grow each year.”
Ryan said one of the biggest surprises in planning this year’s event has been the Tropicana Las Vegas, which has openly waved the rainbow flag in support of, and welcoming to, the LGBT community. The Tropicana completed a $180 million South-Beach-inspired renovation in 2011.

“I am very much a people-watcher and there is a secret spot (at the Tropicana Las Vegas) that overlooks the entire casino floor that I like to stand and watch the guests come and go,” Ryan said. “On a recent planning trip to Las Vegas, from that spot, I counted at least five gay couples walking through the casino floor openly holding hands. There was no gay event of any kind going on, just a regular weekend at the Trop and it made me so proud that those guests felt comfortable enough to be able to do that. Of course a few gamblers’ heads turned and looked, but I did not see one person snicker or say any kind of derogatory comment.”

Come Jan. 18, the Tropicana will be almost all gay. And elsewhere in the city, too.

“I have been contacted by a myriad of (non-LGBT run) businesses wanting to be a host venue and offer specials to our attendees,” Ryan said. “The hardest part is going through all the offers and picking those that are the best deal for everyone and, more importantly, one (that attendees) would actually take advantage of.

“I could list hundreds of offers on our event website discount pages, but that would dilute a big part of our success, which has been to filter through those (available) and pick the best ones (that are) cost-effective to all of our participants.”

Case in point, Maverick Helicopter Tours, which offers discounted night flights over the Las Vegas Strip. The heliport is five minutes from the Tropicana and the tours are 15 minutes.